In order to meet increasing demand Movax Oy has invested in a new horizontal boring machine TOS WHQ 105 CNC. Foundation work was done in March and both Movax pile driver and piling hammer were used in the process. Capacity of foundations was secured with 6 tubular piles which were vibratory driven by Movax SG-60V. Pile driving was finalized with Movax DH-20 hammer in order to achieve required load bearing capacity. 12 mm thick rubber mats were placed around the pit to isolate the vibration of the boring machine. After placing over 2,500 kg rebar to  the base  50m3 concrete was casted upon.

New boring mill arrived by the end of March to Movax factory and the machine is used in manufacturing parts such as vibro cases and pile clamps for the pile drivers . The installation was completed during May and the machine is now fully in operation. 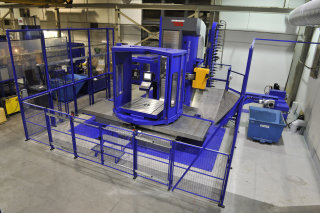